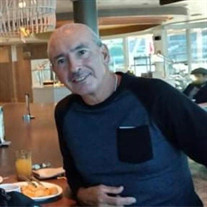 Alfred “Big Alfred” Eugene Petross was sent into the company of angels on December 8, 2021. Known as a kind, compassionate friend to all, Alfred most proudly answered to the name “Dad”, a title given to him by his best friend and son. A person of great wisdom, strength and humility, Alfred began his life on December 15, 1962 in Del Norte, Colorado. At a very young age, Alfred had to learn his independence, something that echoed throughout his humble life. For the years leading up to the 8th grade, Alfred grew up in Rifle, Colorado. Truly honoring the world as God’s beautifully designed playground, Alfred embraced athletics and obtained a series of track and field records. As a young man, Alfred established an impeccable work ethic and quickly began working to purchase his first home at the age of 18. Understanding the value of equity, Alfred never chose to accept credit and instead would make the courageous decisions to ride his bike to work, a five mile trek in sunshine or rain, frigid cold and deep snow. When Alfred became a Father his whole world changed, and he was determined to provide in a way that taught honor and integrity. Always wanting to be involved, Alfred chose to coach his sons’ football and, most notably, soccer teams. Alfred enjoyed the opportunity to engage, coach, and grow with the players and their families. Alfred was employed with South West Redi Mix, Rio Grande Water, and CDOT; however, his most fulfilling endeavors were the many odd jobs he would either find or solicit on SLV Junction and Facebook Marketplace. Alfred used these unique opportunities to forge friendships, and live out his life mission of “helping others.” Alfred’s life is a beautiful illustration of being in service to others. He would help anyone in need and give the shirt off of his back. The greatest memory Alfred lived was a recent Alaskan cruise with his son. Alfred is survived by his son who proudly carries his name, Alfred (Fabian) Petross of Denver, Colorado, and beloved fur babies Titters and Squirt. Mother of his son, Beverly Mestas of Alamosa, Colorado, and daughter Rebecca Petross of Rifle, Colorado. Father-in-laws Frank Mestas and “Nano” Gabriel Atencio, sister-in-law Brenda Jimenez, niece Sarah Jimenez, and sister Donna Petross, all of Alamosa, Colorado. Friends Mary Porter, Bill Havens, and Brother Richard, all of Alamosa, Colorado. Lastly, “Brother Ben” Munguia of Colorado Springs, Colorado. Alfred was welcomed into Good Lord’s Kingdom by his grandfather Fermin Martinez, sister Arlene Pacheco, mother-in-law Martha Atencio, and brother-in-law Armando Jimenez. A vigil service with recitation of the rosary will be held in May 2022.

The family of Alfred Eugene Petross created this Life Tributes page to make it easy to share your memories.

Alfred “Big Alfred” Eugene Petross was sent into the company...

Send flowers to the Petross family.